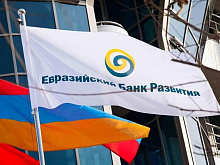 YEREVAN, August 5. /ARKA/. A $30 million loan that the Eurasian Development Bank (EDB) will provide to the Tashir Group of Companies will be used by the latter to introduce international management standards and automated accounting systems in Armenia.

The agreement was signed by Deputy Chairman of the EDB Board Denis Ilyin and Narek Karapetyan, First Vice President of Tashir.

The agreement signed during the EDB delegation's visit to the industrial site of Tashir Group in Yerevan, where, in particular, automated accounting systems are produced.

The introduction of automated accounting systems are expected to significantly reduce power losses in grids and improve energy efficiency.

EDB Board Chairman Nikolay Podguzov said the bank’s strategy for Armenia focuses on modernization of the country's energy system. He said that this project, involving EDB and Tashir Group is an example of industrial cooperation throughout the Eurasian space.

"It will play a positive role in organizing the supply of electricity in Armenia, in ensuring price stability and, ultimately, the sustainable development of the country," he stressed.

In his turn, Narek Karapetyan stressed that the Tashir Group has the potential to implement $100 million worth of projects in 2022-2027, $30 million of which will be provided by EDB, and $70 million will be invested by Tashir Group from its own funds.

Founded by Armenian-born tycoon Samvel Karapetyan, the Tashir Group of Companies is one of the most influential organizations in the Eurasian region since its creation in 1999. Today it comprises more than 200 companies and is one of Russia’s leading real estate groups, although it operates in a diversity of other sectors, including manufacturing and energy.

God save us: Tony the Tiger and his milk-cooled PC come to Twitch